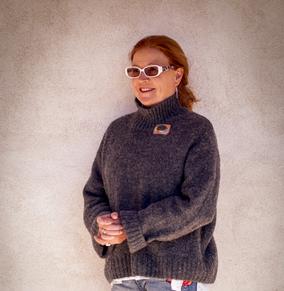 Born in Germany and grown up in the Canaries,Spain

Heike took to art as soon as  she was able to hold a crayon.

to learn a "real profession" so she became a nurse.

Heike's second career was being a flight attendant with Lufthansa, German Airlines.

For almost 14 years she traveled the globe and took art work shops in 5 continents.

Since 2004 Heike calls  Santa Fe,New Mexico her home, only 4 years later she became an American citizen.

In 2013 Heike went back to college in Santa Fe, where she is working currently on

her degree in "metal arts".

Since 2019 Heike is a Plaza artist in Santa Fe, about twice a week she sells her work

at the North side of the Plaza, the historic Square downtown Santa Fe,NM.